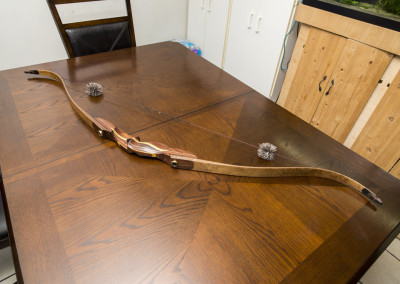 The takedown recurve bow has been growing in popularity in recent times and it’s easy to see why. The main reason, is because they’re more easily transported than their cousins are, instantly giving them a leg up against bows that aren’t so easily transported.

But, this begs the question, then —

What is a takedown recurve bow?

A takedown recurve bow is a bow that is made out of three total pieces, being a riser and two limbs, that allow the bow to be assembled to be used and taken back apart again when it’s time to pack up. The limbs attach to the riser (handle) via two screws, one for each limb and when apart allow the archer to store these parts in a smaller case or even backpack.

To get a better idea of what a takedown recurve bow is, you also need a solid understanding of what a one piece recurve is —

What About A Regular Recurve Bow, What’s That?

This is done on purpose to extract more power to the string, and therefore help the arrow move faster and transfer more energy upon impact.

But these bows aren’t without their downsides, as we’ll see next —

The negatives to takedown recurve bows:

There aren’t many negatives out there, but there are a couple. First, is that the takedown bows are a little louder on the release than the one piece recurve bows are. It’s not like going to a rock concert, but it is there depending upon the bow and how it is set up.

This is true just because of how they’re designed. Because there are three pieces instead of just one, there tends to be more vibration in the bow itself and this vibration makes noise.

This can be detrimental because you can scare your deer off shortly after releasing the arrow, either causing you to miss entirely or wound the animal beyond what is acceptable. This loudness can be exacerbated by other things like using the wrong arrows, but we will cover that in a future article.

To find a solution if you think your takedown recurve bow is too loud, you can try different arrows or add whiskers to your string to help mitigate this noise as much as possible.

Second, these bows tend to be heavier because more material is needed to help reinforce them to make them as strong as their one-piece counterparts. This extra weight tends to be minimal for most archers, however.

Finally, because they need to be assembled before use there is more room for error during that assembly. The limbs are held to the riser with screws, for example, and if they aren’t put on correctly and then used, it could be bad for the bow.

Fixing that just comes with experience and practice putting them together.

The positives far outweigh the negatives, in my opinion. The main benefit is that the bow can be disassembled and more easily transported than their counterparts can. They break down into three separate pieces and can be put into a backpack or other storage area.

Because the bow comes apart it allows you to change your draw weight that much easier, as well, without having to buy an entire new bow. Since you’ll only have to replace the limbs, you can buy heavier limbs to up the number of game you can safely take with your bow, while keeping your lighter draw-weight limbs for target practice or to teach others.

Finally, if a single part of your bow becomes damaged, you don’t have to replace the entire thing. If your riser (the part you hold) gets damaged, you can buy just the riser. Same with the limbs.

Should I Buy A Takedown Recurve Bow?

The correct answer is that it depends on what you plan to do with your bow. If you’re getting serious about archery and/or hunting with a bow then a takedown recurve bow may be a good place to start.

To figure out if you need a takedown recurve, try answering the following questions:

If you answered yes to either of those questions then looking into a takedown recurve bow might be a good idea. And if that’s the case, then —

What is The Best Takedown Recurve to Buy?

This is going to be subjective, but we really like the Samick Sage Takedown Recurve Bow, especially for the beginners out there. You can read our review on it, here to see just why we like it so much, but suffice it to say that this is a great bow for beginner to advanced archers with a lot of support in terms of being able to buy parts for it as needed.

Next Up: How to pick a recurve bow.