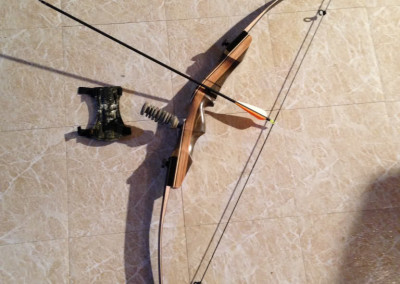 Not much has changed in bow technology over the last few centuries. Sure, new materials have come out and the takedown recurve is a relative newcomer, but for the most part, the bow hasn’t changed that much. If you’re just getting started in archery for any reason, to include hunting or target practice, you may be trying to figure out what type of bow you should be buying.

For this purpose, it’s beneficial to know what a recurve bow is and what the benefits of a recurve are compared to other types of bows.

We aren’t sure exactly when the first recurve bow was made, but the benefits of a recurve far outweigh that of their long bow cousins.

But, this begs the question then …

What is a recurve bow?

A recurve bow is a type of bow that, when viewed from the side profile, has tips that curve away from the archer. These curves tend to give the bow more power and the arrow more speed when released. When compared with a longbow of the same draw weight, the arrow from the recurve will typically be moving faster and hit the target harder, making this an ideal hunting tool, for a few different reasons.

Generally speaking, as pointed out a moment ago, a recurve bow creates more energy to release because of the way the tips curve away from the archer. Because of this extra energy, it tends to translate into more power for the string as it’s released from the archer’s hand. That extra power is transferred into the arrow as it flies, causing it to fly faster.

This is important because you actually want to be able to hit your target in the spot you’re aiming at so you don’t damage your target, but kill it.

The arrow released from a recurve bow will generally have more power (in the form of kinetic energy measured in foot pounds) in it than an arrow in the same draw weight traditional bow in another form (like a long bow). Once again, the reason why this happens is because of the tips curving away from the archer.

More important than why it happens, is the reason why this is important and it has to do with your target.

An arrow moving with greater speed and kinetic energy is going to be more lethal upon impact downrange, which means a more ethical kill. None of us want to drag the death of our kill out any longer than it has to be.

When Speed and Power Isn’t Accurate:

I feel like I’d be dishonest if I didn’t also say that the above statements, while mostly true, aren’t always true. A lot of the above also depends a lot on other points, like the weight of your arrows for example.

I’d feel remiss if I didn’t at least point you in the direction of a decent beginner recurve bow that will also work well even after you’re a more advanced archer. This bow also won’t break the bank, which is a huge plus, too.

The Samick Sage is one of the best, most beginner friendly recurve bows out there, that has been around for a long time and has gotten many people’s feet wet in archery. You can read our Samick Sage Review, here.

In short, the Sage is a takedown recurve (learn more about what that is, here) that is durable with reinforced limbs and has the ability to be upgraded as your form and strength improves and can begin to handle a heavier draw.

Amazon conveniently has them in stock, here.

At the end of the day, if you’re new to archery and don’t know where to start, a recurve bow is an excellent option that can serve you reliably for years to come.

If you’re a beginner, read this next:

How do I choose a draw weight for my recurve bow?