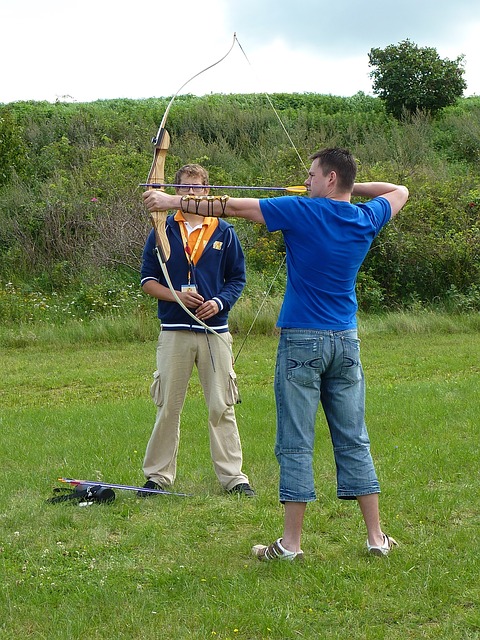 There are a few different reasons why you’d need to know how far your arrows will shoot from a recurve bow. The most important reason is if you’re a hunter and need to know what’s the maximum distance it’s safe for you to take your animal to give it a humane kill.

The last thing you’d want is to shoot a deer in a spot that won’t kill it immediately, causing it to suffer before it dies.

So, let’s answer the question, then —

How far can a recurve bow shoot an arrow?

A recurve bow has a maximum distance of several hundred yards, with the maximum effective range much lower than that. For hunting, the longest distance you’d even want to consider aiming at an animal is 20 yards, ideally less, because the animal can move a lot in the time it takes for your arrow to travel that distance, and jump the string.

Of course, this will depend largely on the type and weight of arrows you’re using, the draw weight of your bow, and your own personal skills as an archer.

What’s the difference between effective range and maximum distance?

In the shooting sports, both for archery and other various types of arms, there is what as known as the maximum range and the max effective range, the word “distance” can be exchanged for the word “range” in either instance.

So, if you’re hunting a deer with your recurve bow, your maximum effective range or distance is the distance of how far you can safely take that deer with a clean kill.

*NOTE* An arrow that is traveling through the air is dangerous until it stops, it’s just that the longer it stays in flight, the less lethal it becomes to its target.

How do I find my effective recurve bow range?

The easiest way to find out what your effective range is when you shoot your recurve bow is to actually release some arrows at various distances, and then measure penetration.

Now I can’t say exactly how much penetration you should look for because each bow, draw weight, arrow and weight, and even your abilities as an archer, are all going to be different than what mine or anyone else’s would be.

But, you should begin to see penetration slack off the further back you move your target.

Will my surroundings change the recurve arrow’s range?

There are actually a lot of different factors to consider when you’re shooting your recurve bow, and a lot of this is dependent on what you’re doing with your bow.

These factors matter more when you’re hunting, because the last thing you want to do is have an inhumane kill because the wind forced your arrow off target.

Let’s take a look at some of these factors:

The wind is the biggest environmental factor for archers trying to make accurate shots. When I was in the Marines, we had to qualify with an M16A2 at 200, 300, and 500 yards and one of the biggest factors that changed our accuracy, even with the tiny, fast moving bullet, was the wind.

While you won’t be shooting your arrows to those distances, arrows are generally a lot bigger with the arrow’s fletching also installed, which are those little feather like things at the back of the arrow that help with stabilization.

Even though they help to stabilize the arrow in flight, they can also be affected by cross drafts of wind and can greatly affect the accuracy of the arrow before it hits the target.

Generally speaking, your arrow will be affected more the longer it flies, than at shorter distances.

This wind will usually push the arrow more to the left or right than up or down, but it certainly can push down or up to at least some degree.

There are a lot of different thoughts about how much, but moisture can change an arrow’s trajectory, in the form of rain or ice, to at least some degree. While it doesn’t change it much, it can by a couple of different ways.

For example, in a torrential downpour, not like you’d want to shoot in one, the longer your arrow flies through the rain, the more likely it is to be affected by it. It’s not a lot, however.

Probably a bigger impact on your arrows during rain, is a waterlogged string which can seriously impact your draw, release, and how effective your arrow is at flying, to even include your accuracy.

Because of this, we generally say that it’s fine to hunt in certain rain that is light to medium, and stay home or at least wait if you’re in the field, until the rain stops.

A lot of people don’t initially take into account the terrain they’ll find themselves in, that is, until they get outside and find themselves surrounded by thick brush that your arrow cannot get through.

I won’t spend a lot of time on this because every area is going to be different, but just as long as you’re aware that your terrain can affect your arrow’s flight path.

I said a little while ago that your accuracy shouldn’t be considered when figuring out what your maximum range is. But, that isn’t entirely true, and the reason why is probably obvious.

And if you held your arm perfectly parallel to the ground, which is about what you’d be doing if you were hunting closer distances, the arrow would fly much farther, but not as far as if you were holding the bow slightly above your arm being parallel.

How do I increase my effective range?

There are actually ways in which the average archer can improve the distance their arrows travel. The number one way is to practice shooting so you can get up to the point where you’re more consistent on your draw/release, AND can choose a heavier pound recurve bow.

This includes things like dry firing a tool (you’d never dry fire your bow because you’d damage it) in order to strengthen your back muscles to pull a heavier weight bow.

Utilizing a different type and weight of arrow will also help to some degree, but not as much as training for a heavier weight bow, and then moving up to that heavier draw weight bow.

The maximum range of a recurve bow may be a lot longer than you think, but that doesn’t mean its effective range is that far. Only hunt within your limits to ensure the safe, quick and clean kill your animal deserves.